Based in Fairfield and Howley, Warrington, The Old School is a not-for-profit charity here to support, develop and empower people through creative learning.

The Fairfield and Howley Neighbourhood project was created in 2008 when St. Elphin’s Primary School moved to a new premises.

The ‘Old School’, which remains the property of the Church of England Trust, was developed into a community space in 2010 and since then has been providing opportunities for local groups, organisations and charities to create, connect and learn.

Built on the hard work and dedication from local residents and Warrington Borough Council community support, the FHNP grew to serve a variety of local initiatives, organisations and community groups.

In 2015, the centre was awarded a national award for volunteering, presented by the Duke of Kent.

In 2020 we began to develop a new set of aims and objectives, positioning The Old School as the space for community arts and creative learning. The core objectives of The Old School are built on the foundations of its unique character and position within the area. The ability to offer flexible spaces for a wide range of uses makes it more than just a community centre, it’s a safe and accessible venue that encourages meaningful change.

Now, more than ever, we want to encourage activities, projects and events that promote positive health and wellbeing, informed lifestyle choices and sustainable living, all under the banner of community arts and creative learning. We’re really excited about our new journey and direction over the next ten years and we really hope you want to be part of that adventure as well.

Vision: To provide an inclusive and sustainable centre for the people of Warrington, encouraging and nurturing growth through creativity. 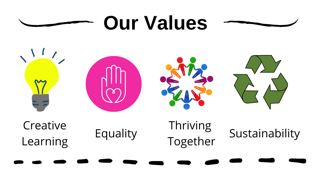 SEND US A MESSAGE

We would love to hear from you...